Check out the latest render sequence:


If you compare it to the sequence used in the game, you will notice the "movie" Allanor has clouds and even a storm on the dark side of the planet. Since the backstory of Allanor was only hinted at in the game, and since it help developing areas "knowing" their backstory, I imagined that the Chodak polluted their homeworld and eventually had to leave it. The heavy industry on the planet's surface could hint into that direction.

Anyway, I am quite satisfied how this one turned out (positioning the camera to mirror the game sequence was a nightmare). Enjoy!!!

I am really excited today, since a sequence I was working on very hard for a few month finally came together. Here is a screenshot of the rendering process: 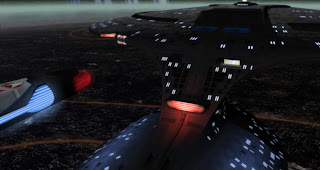 You all remember the Shuttlebays 2 and 3 from TNG, right... the hangar doors from the inside looked totally different from the ones outside. The set artists reused a TMP door for the set, the studiomodel of the Enterprise had a totally different looking hangar bay door.
We never actually saw a launch of a shuttle in one take, due to SFX restrictions it was not possible to actually show us in one take how a shuttle left the bays.
Well... today, more than 20 years later it IS possible. I really worked hard to figure out how to make the inner and outer doors fit together in order to establish a shot of the shuttle launch, in which the camera would leave the bay along the ship.
I came up with a solution which slightly contradicts what has been established on screen, by creating an interconnecting part between the inner and the outer doors, so that the launch bay now has two doors. That allowed me to create a fluent shot without cutting the shuttle launch.
I will post more pictures soon just to get you an idea of how it will look like. Rendering will probably take forever... so don't expect a video soon ;)
Eingestellt von Xavier_Storma um 14:30 Keine Kommentare:

The following pictures show you the "Arrival at Allanor" render from the game (first picture) and the movie (second picture).
I changed the illumination and the texture of the planet slightly to give it the sense of scale.
Not on the picture: The dark side of the planet will feature a lightening storm... I love adding such fine details ;) 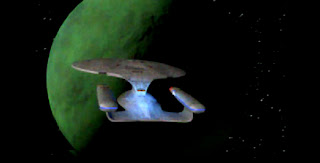 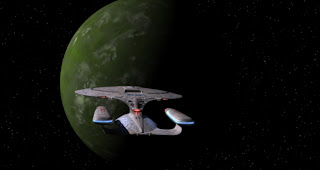