Hey there... Today, again it is time for a premiere. I started recreating the fascinating sets of the Unity Device and wanted to share a WIP with you.

Here is a picture taken from the game: 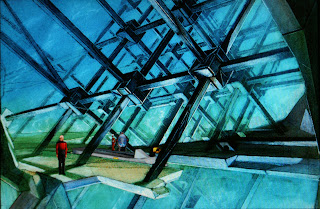 And this is the WIP result of the movie: 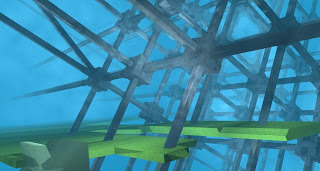 To prove that it's not just a recoloration, here a different perspective on the scene: 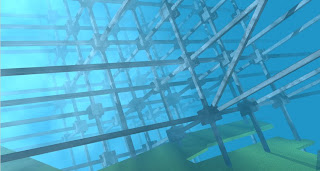 As you can see the illumination does not match, and some bits and pieces of the right and left wall structures are yet to be completed.
It turns out, converting those pictures into 3D is much harder than I anticipated, and you really have to draw some kind of flor plan, to recreate them in 3 dimensions.

Here is the finished mesh for the Unity Device Jump Gate, which allows faster than light travel within the Unity Device. Captain Picard, Commander Pentara and Admiral Brodnack will enter a Shuttle and proceed to one of those gates, to reach the core of the Unity Device. 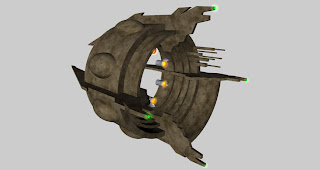 ... is how the actual "live-action" shots will look like:

The film will feature three kinds of "live-action" takes:
- Takes from onboard the Enterprise (reuse from TNG season 5, 6 and 7)
- Real live-action (shooting next summer if everything works out as planned) with actors for the characters which were seen in the game exclusively)
- Awayteam missions (composing both above with newly created CGI enviroments - the most challanging and tiring of the three)

Today, let's start with the first point:
Scenes on the ship are very easy to make. You just have to spot every TNG episode for let's say bridge scenes, cut them down to takes and voila... here we go:

This shot has been taken from the series finale "All Good Things": 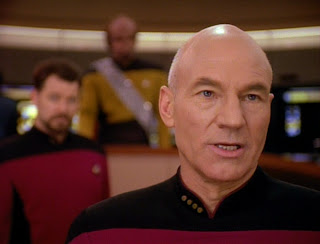 In order to alienate it, so that later you won't be able to recognize it that easily, that shot (like all of them) is recolored slightly. I am also using a program to upscale the image, add contrast and sharpen it.
Since the movie will be presented in 16:9 Widescreen, the frame has to be cut slightly to fit.
And voila: The finished actual A FINAL UNITY picture in its original DVD resolution: 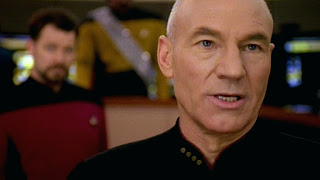 Hey there... I took a pause from the project for the last weeks, but have now returned to it. Here are some surface studies for Frigis, the planet where the Enterprise crew will discover the Garidian Fifth Scroll.

The pictures you see are of the background landscape created for the shots. I have played with the sky, light and cloud settings to see what looks best, but hey... decide for yourself: